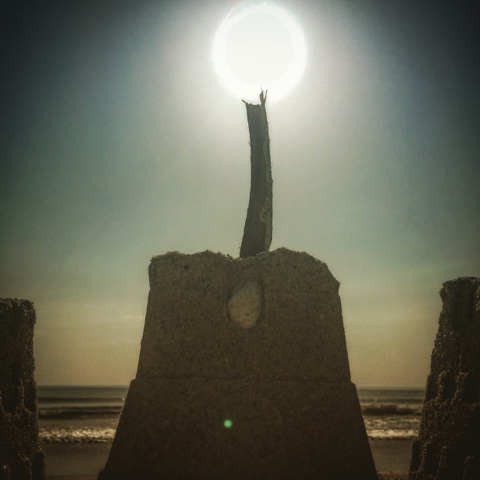 The castle was built strong.
At least as strong as the materials available allowed.
Which is strong enough.
I don't need anyone saying 'it'd be stronger if it were made out of rock, concrete or even wood' because rock, concrete and wood were not available ok.
So stop living your life in an alternative beautiful 'I wish land', where the fruit is sweet, the rocks are plentiful and unicorns didn't all stab themselves to death trying to lick themselves like dogs.
If 'I wish land' existed there would be no need for wishes anymore because the ultimate wish would have already been honored and all the now abundantly available wishes would go wasted damn it.
Lainy, the castles architect and foreman during construction, was proud of her achievement, and honored when praise swam her way.
Praise having recently begun to develop gills after an exhaustive and finally successful cross-breeding campaign with squid, which were able to accurately describe what gills looked like during post coital pillow talk, allowing praise to whip some up in a lab.
And the lord above, impressed with the castle, and relaxing after getting a rare day off from being the thing solely in charge of putting gills on things, glowed light upon the castle, a clear signal that this was a structure for the ages.
Although two minutes after turning on the glow the lord was all like 'for Christ's sake lord, when you're relaxing RELAX, this is exactly the type of thing the doc was saying I have high blood pressure, that and all the deep fried Ox spine'.
The castle was officially a success.
And in being so, totally dampened the embarrassment that came with the fact she peed her pants on the bus ride to the beach.
Or should that be dried the embarrassment.
No, surely embarrassment starts dry, and needs to be moistened?
It's like a rash, you WANT it wet.
Either way, Lainy was feeling good again, something she doubted was possible just minutes earlier.
Although she still planned to put fire ants in her stupid brothers bed for the nonstop teasing he'd unleashed, that stupid faced stupid head.
on August 07, 2015

Email ThisBlogThis!Share to TwitterShare to FacebookShare to Pinterest
Labels: castle