On being good at your job...

And now a quick note on being good at your job...

Roger was terrible at his job
Really bad at
Genuinely shit house at it
Garbage
Just fucking horrible
Shitter than a gnat shit on a mosquito shit near a human poo.
People didn’t seem to care though
Seeing as he was an evil dictators food taster
Seven dictators had died on his watch!
And Six of those were both disliked AND loathed.
And three of them died eating poisoned loaves (two bread loafs and one loaf of pickled cyanide. ((Although frankly the name should have given away the threat enough on that one that some poor food taster's incompetence should have been irrelevant - cause I mean, duh, anything pickled is gross)) ((except maybe pickled old shoe, which is surprisingly vastly tastier that un-pickled old shoe. Although also harder to pair with wine)))
This loaves and loathed combination was of course a coincidence the pun headline writers at the local paper adored
‘Loathed dictator loaved to death!’
Was a popular headline
As was ‘love it or loave it, our leader is dead!’
Although that last one did get a guy called ‘Steve’ fired. But some say it was more for font choice, than his inability to use loaved AND loathed in the headline.
So people didn’t really care how bad at his job Roger was.
And man, he was fucking terrible
Just a fucking disgrace
Shitter than a dog shit on a bird shit near a poo museum.
Then again Roger was also a nice guy
Which always helps
Oh and when he tasted food it somehow regularly resulted in gold being spat out windows
Partly because for some reason dictator chefs often think Gold McNuggets will be what their dictator wants
And yet they NEVER provide a satisfactory variety or volume of dipping sauces
And Roger refused to even TRY an un-dipped McNugget
So he’d just slide them over to his boss, saying ‘yeah great’
And then the dictator would spit the McNugget out the window, with a scream ‘no BBQ, no Sweet and Sour, not even any fucking Honey Mustard, what am I, some sort of fucking peasant!’
So gold McNuggets would litter the outside of the palace window
And if you were willing to wipe the spit off (which 32% of interviewed peasants said they were) you’d get to eat a delicious piece of gold yourself!
So Roger wasn’t hated
Oh and his friend Mike was a popular morning radio host
And people love friends of celebrities!
Even IF said morning radio hosts most famous bit is prank calling the newly widowed
Although normally only widows of dead dictators
It’s probably why Roger and Mike were such close friends
So yeah
If you’re shit at YOUR job
Just garbage
Like even if your SUPER shit
Shitter than a monkey shit, on an elephant shit, near a shit faced shit head shitting his pants
Then perhaps you may not be loathed too!
Which means if you ever choke to death on loaves
Your death headlines will be pun free!
Congratulations! 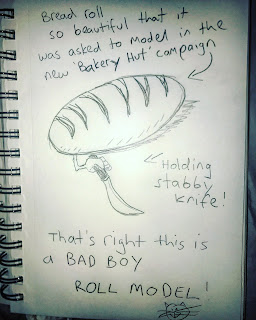