I’ve always been intrigued by animals that get around on floating icebergs. “Why an iceberg?” I’ve been known to wonder to myself from time to time. Often even times when thinking about animals on icebergs!

Well this week I decided to wonder know more, and instead go out and meet one for myself.

What I found turned out to be intriguing indeed, but also sad, fascinating, scary, and even intriguing.

You see, the first animal I managed to spot drifting into the harbour atop of an iceberg somehow turned out to be an animal which had stowed away on an the wrong iceberg which had led it to the WRONG continent!

Furthermore, as the first person to intercept it on its approach to land, I was now the person who’d lucked (or unlucked) into having the responsibility to tell it it’s mistake.

You can imagine my abject terror. But there was also fear. Reservation. Malaise. And even also mild terror. Which on top abject terror, made it somewhere between extreme terror and obscene terror, but I was too scared to deal with extreme nor obscene terror, so I isolated my two branches of terror onto two branches, carefully making sure that even though I obviously knew the trunk of these terrors was the same, the branches themselves were individuals, and as individuals they had the right to compartmentalize themselves anyway they wished. In this case separately. So I could calm the fuck down.

Besides, this wasn’t all about me, it was only half about me, the other half being my responsibility to this animal. Plus fractions terrify me. So how could I possibly be expected to isolate the sums of all the terror and properly label it now? Seriously.

I decided that instead of sucking into myself, I should blow out of myself, towards the poor lost animal. And it wasn’t hard, for I did have lots of questions. Questions such as:

- Where did you THINK you were going?
- How does one power a berg anyway, ice or other sort of berg? Wind? Petroleum? Nuclear?
- And ARE there bergs in non-ice categories?
- Because if there are some god damn nuclear-powered margarine-bergs out there we deserve to fucking know!
- And if there is not, then just call them all bergs, forget the f’n ice.
- Seriously.
- Just go with berg!
- Berg. Berg. Berg.
- What’s so hard about that?
- It’s even fun to say.
- Beeeerrrrgggg!
- Go on try it.
- You’ll see it’s fun I swear.
- Go on then.
- Say it with me.
- “Berg. Berg. Berg”.
- You didn’t go.
- Do you not WANT to say it?
- Is that it?
- Or is it something else?
- Cause frankly you haven’t answered ANY of my questions! What’s up with that French Fry?
- I’ve decided to nickname you French Fry by the way.
- And I know it doesn’t make sense! Yeah. Exactly.
- So what is it?
- Too good to talk to a human?
- Oh fuck you!
- You think you’re better than me?
- Because YOU’RE an Elephant!
- Yeah.
- How’s that better than me?
- Plus how did you even get on an iceberg?
- And what made you think it was going to take you to California?
- And who told you California was a continent? Cause whoever it was, was an idiot. And I don’t want you hanging around with idiots.
- Cause idiots are morons.
- And if you say ‘nah, I was just listening to the Mommas and the Poppas and got whimsical for the West Coast, I’m gonna tell you this - YOU’RE LISTENING TO THE MOMMAS AND THE POPPAS ALL WRONG MAN! It’s a fantasy. You’re not supposed to try and LIVE it!
- Also were there penguins on this berg when you got on? Cause if you’ve started eating birds I’m going to be very cross with you.
- We like you Elephant.
- Us humans.
- I know I suggested just before that I think I am better than you because I am a human and you’re an elephant.
- But that was just anger talking.
- Truth is we like you.
- Us humans.
- We like you a lot.
- But that’s partly because you DON'T eat birds. And because you DON’T take the Mommas and the Pappas literally. NO ONE likes an animal that eats birds and misunderstands the meanings behind an entire bands’ body of work. They’re so damn majestic! (birds and bands).
- So if that’s what you’re telling me, then why don’t you turn this berg right around?

But that’s when it hit me. I was in no position to judge. I myself had arrived in Australia for the first time stowed away on a floating mattress that I thought was headed for Oklahoma. And I was a Muskrat when this took place. And I’d been inspired by the body of work of The Kinks, which I had misunderstood to be summed up as telling the world “why buy a waterbed, when you can just be on a bed in water?” And having interviewed the Kinks subsequently they told me “You’re missing the point man, our body of work was supposed to be understood to be summed up as “don’t float on a mattress to a landlocked American state where cowboys ride, because if you do, one those cowboys may have a bull that will puncture your mattress, and then how are you going to get home? A flying car? Yeah right!” (the lesson is always meet your heroes, they have so much wisdom to share).

So I hung my head in shame. And I told the elephant the bad news. Rubbing his trunk in commiseration (and sneakily checking for penguin breath. There was none. So feel free to keep liking Elephants). And I shoved him back towards California. With a “farewell” and “safe travels”.

And you know what?

The elephant did speak back to me finally.

Just with his eyes.

But they clearly said…

“Berg. Berg. Berg. Yeah that is fun. Thanks so much for that. And if on my travels I see any Muskrats floating out at sea on a mattress, I’ll tell them, what the Kinks told you, we’re all in this together you see. Animals. Humans. Birds. Bands. And even Idiots”.

The next time I saw that elephant, he’d taken human form and was about to interview the ghost of Momma Cass from the Mommas and the Poppas (I think she was one of the Mommas) so I knew he’s going to be ok.

And my terror drifted away.

Like a French Fry on a nuclear-powered margarine-berg. And that’s something we can all enjoy. 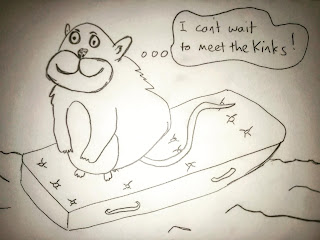 Email ThisBlogThis!Share to TwitterShare to FacebookShare to Pinterest
Labels: berg, elephant, floating mattress, iceberg, muskrat, the kinks, the mommas and the pappas