Thinking is good. I like to think that I think at least once a day. Possibly even twice now that I think about it. And on TOP of that sometimes I even THINK about thinking!

Well check this out. I'm PRESENTLY thinking that I like to think that if I were currently smiling at a retired horse saddle on 'official business' the following would also be true:

- I'd be living in the NOW. I mean obviously, I couldn't be doing that 'currently' if I was living in the nineteen sixties, because I wasn't even born then you idiots.
- I'd never had anything drop from a tree on my head heavier than a nut, or possibly an antique iron furnace, but UNLIKELY an antique iron furnace, because antique iron furnaces are terrible climbers, and I HATE to be surprised from above by bad climbers. Sure, if you can't climb well then surprise me from below all that you want, you've earned that, but stay out of the damn trees.
- I'd be on planet earth, or a competitive planet that I'd PERSONALLY signed off on, I'm talking about a serious matter here, I don't need speculation and heresy fucking with the rules of my universe okay, got it!
- I'd currently be employed by a company which sends me on official business I don't yet fully understand, and one that possibly, at least occasionally, sees me deal with horse saddles, or possibly even saddles used on a variety of animals, including, but not limited to - moose, donkey, wildebeest, spider monkeys, Sasquatch, giant robot spider legged bananas, mules, and spiders stepped on by mules.
- However the special saddle I'm dealing with now would mostly, if not exclusively, have been used by horses. Not that it DEMANDED for it to be that way. I mean it may have even requested to be on a spider that had been stepped on by a mule once or twice, or even a camel that thinks it's a dolphin, even though, ha ha, that's a little implausible, camels don't have thought, but the point is that this saddle has a sense of humor, and a complete lack of prejudice, okay, or else I would NEVER have agreed to be anywhere near it.
- That I got paid per smile, not per thing smiled at.
- That my job would allow me to smile at a VARIETY of things. I mean you can't honestly think I'm going to take a job where I only get paid to smile at one specific thing, I'm not a saddle, I don't even contemplate the implausible.

Unfortunately however, I'm only presently thinking of thinking of smiling at a rookie saddle. So far from retirement. So much ahead of it. So much of it likely to be painful. That's why my smile is fake. Yet I 'think' that's beautiful.

Yep thinking is good. Possibly even great. Think on THAT for a while or two...

Speaking of things so true you can take them to the bank, today's blog was sponsored by - light! 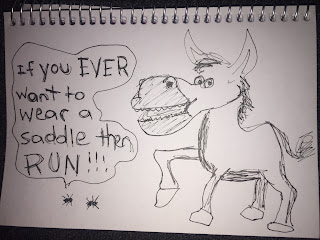