Harriet didn’t own a Nightstick.

Oh she had her fair collection of Day Sticks.

She even had a Crack-of-dawn-Stick.

And the story of how she got it had floored men and women alike.

It was a favorite of hers on the dinner circuit.

Where she would procure an invite to dine and whisk away the evening with tales and truths of the memory.

But none procured her more diner invitations than the story of how she got her crack of dawn stick.

It involved elves (fake), a small monkey (real), seven times being given penance to the free people of the Grover Fields (oh too real) and a battle of wits with a stick merchant who was known to make the best specific time of day sticks the land had ever seen.

And this particular land (the Grover Fields) was itself known to make the best specific time of day sticks in the whole county.

And this was THE Stick County.

It was on their Coat of Arms and everything.

Still a nightstick was what she craved.

Oh and she also craved for someone to tell her what these sticks were actually for?

A poster of Duran Duran up?

She didn’t even really like Duran Duran that much.

She did like the lyric “I wont cry for yesterday” though.

It wasn’t the hit song that the original had been.

But she wouldn’t cry for that.

Her tears were taken.

Actually that’s a good idea for a song…

“Her tears were taken”.

And if you come any fucking closer I’m going to whack you!

Whack you with a stick!

And you better believe I have a Duran Duran stick!

I mean who doesn’t? 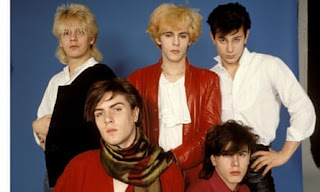