There are lots of things I have considered doing when this current dealy is all over:

- Milking a moo cow (the only kind of cow I’ll even acknowledge).

- Monitoring the migratory patterns of clams (They might look like they mostly stand still, but I am not THAT easily fooled).

- Nocturnal donkey breeding (apparently it can result donkeys that have x-ray vision, but no one really knows for sure, because getting donkeys to breed at night is really, really hard. Also if you ask them “can you see through that wall” they rarely answer. But maybe they CAN see through that wall. And maybe even THAT wall).

- Replacing Helicopter blades with boat propellers and seeing if anyone notices. And if they do notice, what do they do about it? Call the boat police? The helicopter police? The non-land-based-travel-mode police? A repairman? Who knows?

- Experimenting with silence as a new form of serenading clams (maybe all those pick up lines people have been trying is the OPPOSITE of what they’re into).

- Lighting up a beach with my mere presence.

- Hoping that light attracts clams (it’s got to be something damn it).

- Ignoring the migratory patterns of clams. (If they’re going to keep dang ignoring me then why I should I pay any dang attention to them!)

But there is one thing I will definitely NOT be doing when this is all over.

I will NOT, I repeat NOT, purposely fall off a skateboard OR ANY OTHER form of foot-propelled conveyance, at least not with the intent of intentionally scraping my knee as a method to collect enough Band-Aids to make a hat.

And yes, I know, when you’re out in public, and you fall off your skateboard or other foot propelled conveyance either intentionally or accidentally, and you scrape your knee, there will often be a person, sometimes numerous peoples, who will come up to and say one of the following things:

1. Oh wow, you really scraped your knee there, need a Band-Aid?

3. Yuck yuck yuck, blood. Oh my. Oh my oh my oh my. I can’t look at it. I am sorry. I can’t look at it. I am feeling faint. Oh my. I don’t want to be that guy. I don’t. But. Oh my. I am not someone who sees someone hurt and just walks away.  But. I just. I just. Oh my. When I see… b… l…. Oh my. Does anyone have a Band-Aid? There is a kid here who needs a damn Band-Aid. PLEASE PLEASE PLEASE. HELP HIM. What’s wrong with all you people? I KNOW some of you have Band-Aids. In your purse, or in your wallet, well this kid NEEDS ONE NOW. FOR THE LOVE OF ALL THAT IS HOLY SOMEONE PLEASE PUT A BAND-AID ON THIS KID BEFORE I FUCKING THROW UP. IS THAT WHAT YOU WANT? IS THAT WHAT GIVES YOU PRICKS KICKS? TO SEE A KID BLEEDING AND A GUY PUKING? IS THAT THE WORLD YOU WANT YOUR KIDS TO GROW UP IN. YOU SONS OF BITCHES. Oh, wait, maybe I have one. Oh my. Would you look at that? I do.

And yes, I know, in all three of those examples, a free Band-Aid was likely to come my way. Possibly two. So I get it, I do. Lot’s of you are probably out there slipping off all manner of foot propelled conveyance and scraping your knees, collecting those Band-Aids, and making those sweet, sweet hats.

But here are some things you may not have considered:

- Band-Aid hats aren’t as cool as they used to be. Sure in some circles they are only just now starting to hit. I heard of friend cluster out East that only go their first Band-Aid hat in early March, and some of the copy cat friends are only just now beginning to the process of Band-Aid accumulation, and for even the most proactive this can take days, possibly even a week, so that cluster isn’t going to hit peak Band-Aid hat for at least ten days. But that is THAT cluster. I don’t know where your particular cluster is at, but I know where mine is at, and I’ll tell you, I am currently the ONLY one sans Band-Aid hat. Sure I still want one. As I am sure many of you do. They’re really cool. But I can wait. Patience is good. With patience comes reward. And rewards are enjoyable. And I want to REALLY enjoy my hat when I finally get it.

- I probably don’t want my eventual Band-Aid hat to be full of crusty blood. Cause, I’ll tell you a secret, the person in example three above… was ME! Many people have gone down this road towards their Band-Aid hat. And I don’t like it. Every time I hang out one of them I see the crusty blood part of their super cool hat, and I get queasy. Sure you can’t see your own hat, so I wouldn’t make myself queasy if I went down this road, but I care about other people, and you should too.

- Scraping your knee can cause blood not just to go on a Band-Aid, to come OUT of you. And I prefer my blood IN me. I prefer ALL my liquids in me. That’s why I haven’t urinated in six years. And it takes a LOT of time in a sauna to make that possible. So if I can commit to that, surely I can commit to not purposely scraping me knee. Right?

- I am not a kid anymore. I am more like a kid plus a bit. Which should have a name, but does,n’t so I will coin it right now… A PLUSTER.

- I am a Pluster, and Plusters can’t go around scraping their knees, they already have a stupid name, and now a stupid knee?

- That could be a good name for a Friends like TV sitcom – A Cluster Of Plusters coming this Fall to NBC.

- Imagine, people will say stuff like “I like this new character Raquel, I mean she’s no Rachael, but she does have one of those super cool Band-Aid hats!”

- I want to be like Raquel, she’s on the TV and everything.

- I take it back. Fuck pacience. I need to be like Raquel and that means I NEED a Band-Aid hat.

- How about this, maybe I WILL go for a little ride on my skateboard.

- And let’s just say, if any of you want to lets say ‘spill’ some gravel in front of my path, well try to throw the right amount of gravel for a well contained medium level knee scrape, and I look the other way.

- In fact looking the other way will make it look more real!

- That’s it; hand me my skateboarding, I’m going to the beach! 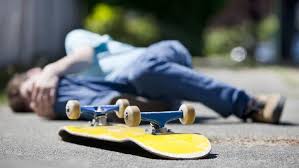