I tried a brown thing. Here’s what happened.

I know I have.

They'd be like – "Who the fuck are you, and why are you stepping on my onions, I grew those, and now they're squished, SQUISHED".

Oh those dang time travelers and their onion squashing. DANG them!

Then again I wish I could time travel so I could squish an onion.

I bet it would be fun.

- You’d get to find out if onion juice is a thing.

- And if it IS a thing you’d get to find out if it is a good or a bad or a somewhere in-between thing, depending on your personal taste/ texture/ and liquidity profile preferences, which are based on your personal opinion.

- And I bet having a personal opinion is probably ace! Possibly even DOUBLE ace.

- And double ace beats almost any three of a kind!

- And I bet time travel would be cool!

Sadly those aren’t options available to me, because I am just in the now times, known as the present. A time where two years from now practically no people will be born who will be interesting to 2nd BC South American onion farmers.

Which is probably the exact reason why some of the news seems bleak these days.

What’s not bleak though are brown things. And one thing that’s brown is brown ONIONS.

Today I tried one to see if it is fun. Here’s what happened:

I grabbed one from my onion bowl. Which I keep on my kitchen counter next to my onion plate; near my onion platter; over by my onion decanter.

It was a fresh onion.

I knew this because I trash talked it. And when it trashed talked back its trash talking was so fresh man.

It was in this embarrassment that I decided to finally see what was IN an onion. All these years of having receptacles full of them surrounding my every move and it had never occurred to me before. I’d just been eating them whole like a caged hippopotamus eating a watermelon for the amusement of tourists, and then walking on the bottom of the lake rather than swimming, and being ironically one of the deadliest animals in Africa, despite the reputation of some of my brethren.

Well that was about to change. Because today I wasn’t just enjoying a delicious onionskin wrapped snack. I was finding out if said snack was FUN, and that would require science.

And like the small child who no longer has a pet four tailed owl faced snow otter, because of what HE’D done for science, I had to do what scientists do. And what scientists do is dissect shit. And in this case the shit was brown. A brown onion!

What I found inside the onion shocked me.

Shocked me like a cloud of dust in a dust bowl. (You just don’t think of clouds in bowls. You think of cereal. Or perhaps freshly made pasta. But clouds? What’s next? Cereal in the sky? That would be ace. Although it would be hard to get your cereal-to-milk ratio correct. Particularly seeing as cows insist on their udders pointing down. It’s almost like cows KNOW what’s coming, and want no part of it. Well cows, I say good for you. You’ve done enough dang it).

Still what I found inside the onion shocked me.

It was onion guts.

I suddenly knew an instant truth immediately – I knew, finally, exactly WHY BC era farmers didn’t want their onions squished by time travellers.

Because in BC, science hadn’t been invented yet, so if you were to be caught with a bucket of onion guts, people would probably think you were weird!

And people in BC probably didn’t want people to think they were weird. You know, because they wore robes and sandals and stuff, so they were already teetering on the edge.

And if your teetering on an edge, there is a chance you’re on a cliff, and if you’re on a cliff there is chance there are clouds down there, and who knows WHAT they are made of – precipitation? Fruit Loops? BRAN? Oh holy hell.

I finally understood the BC era.

And feeling good, feels great. And being great is one of the FUNNEST dang things out there dang it.

Therefore I can officially declare it scientifically and officially once and for all – onions ARE fun.

Oh also onions go great on a sausage sandwich. Which is what I had for dinner.

Join us again tomorrow at the Fleeting Forever are certain things that you might think are fun or might not think are fun files tomorrow where we’ll try something else and see if its fun. 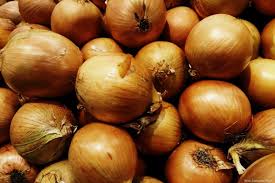 Email ThisBlogThis!Share to TwitterShare to FacebookShare to Pinterest
Labels: the how to have fun from home files