Everything is capable of more than we think

Another completely positive message from Dave and the team here at Fleeting Forever:
I think of all things capable of being described as 'most foul' my favorites are:
- Murder.
- A baby half-horse and half-ferret. Or more specifically the most 'foal' looking baby out of a litter of offspring born to a horse father and a ferret mother, that looks the most like a baby horse, and least like a baby ferret, out of the entire litter. So much so (and in the absence of uniformly accepted label for this new and rare species of animal) that the owner of the horse, the ferret, and now the youngsters, is really, really tempted to pass this one, if not the whole litter, off as a full 'foal', but can't bring himself to be such a filthy liar, so calls them 'foul' instead, which ultimately may prove to be confusing, but at least keeps his conscious clear, and completely coincidently allows its inclusion in this list without me coming across as some form of fucking idiot who doesn't know the difference between foul and foal.
- Something gross.
Yep 'most foul' great term, even greater variety of uses. But I bet before you read this that you didn't even realize most foul could also be a term for things such as 'something gross'. Yep, everything is more capable than you think it is.
So next time there is a disgusting foul stain on your bedroom wall, don't think 'I'm not CAPABLE of cleaning that', because you may well be capable. And also instead of spending that time self-doubting, you could be using it for something positive, such as wondering just how a baby half-horse and half-ferret ended up imbedded into the fabrics of your wallpaper, or even who on earth would let their horse fuck their ferret?
This has been another completely positive message from Dave and the team here at Fleeting Forever. Happy days everyone! 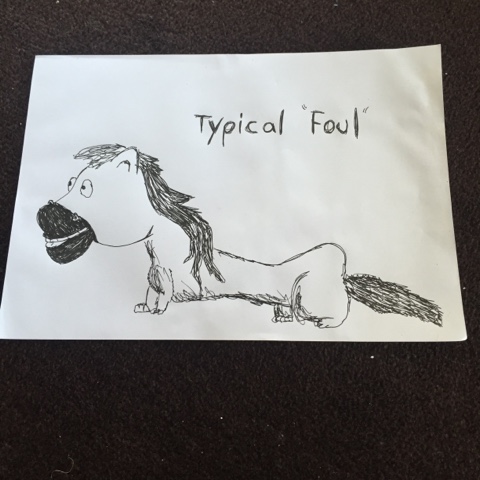