We’ve all been there - it’s Xmas day, you’ve been nogging on the egg, the whiskey sours have been too sweet to avoid, and you've gotten high as fuck on grandmas Xmas poetry reading…

So … you take a break outside for some fresh air. Or to … “get a little sky fuel” as you like to say it to your fellow party goers, you cheeky bastard.

You stroll out. The “fuel”  is crisp. The sky is open. It’s freeing. And it’s oh so dewy dewy fresh. And that’s The GOOD kind a dew (not like fucking dewy dewy stale - who let this dew go stale? If you're not going to use it, put it in the freezer dang it!)

It’s been a magical day, a magical Christmas Day - and all this magic, well, that’s got you believin’ in magic my friend.

So when you gaze upwards, the moon light dancing in your eyes, and you see two clouds separate, like a nail going into wood shown in reverse, and between those clouds you see a brown hooved beast flying towards you through the air, you can’t help but scream...

Then it lands in front of you. A smile on its mullet that could raise a loaf of bread (“self” raising flour - my ass). And that’s when you realize.

“Oh shit, I thought I was yayying one of Santa’s Reindeers, but this is just your run of the mill, stock of the trade, bland as a mule - flying donkey….

What do you do?

Tell it - 'sorry I thought you were a flying reindeer'?

Say - 'ooops, sorry, I thought you were someone else'?

Think - 'Goop, I thought you were my flying donkey buddy “Sonnington” who I have a yaaayy greeting tradition with'?

No way. You don’t want to besmirch the name of your good friend the flying donkey  Sonnington- that’d hurt HIS feelings

So what DO you do?

Well take it from me, someone who’s been there more times than I can count (I used to be able to count, until my buddy Sonnington back heeled me in the temple). You have nothing to fear. Follow MY tips and you too can avoid mistaken identity Social humiliation.

So here they are, my personal, tried and tested:

Top Ten Things to say to a flying donkey to try and convince it that your glee upon seeing them wasn’t because you originally mistakenly thought they were one of Santa’s reindeers, and want to save face both for you and the bland donkey you’ve accidentally elevated to the level of “possibly interesting”, even though it isn't.

1. Just admit it - maybe the flying donkey needs to know that it’s just that - a boring god damn run of the mill flying donkey.

3. And why is running said mill apparently bad?

4. Cause RUNNING just about anything has at least SOME panache right? Running a road crew, running a rowing crew or even crewing a road runners rabbit hunt!

5. I mean you’re RUNNING IT - that means you’re in charge for fucks sake!

8. Angel of the mass of space between here and heaven.

10. Well you rule this weird pointless space at least. But rule you do.

11. And what is that space called anyway?

13. Whichever Angel was in charge of running the naming ceremony fucked THAT up BAD.

14. Plus running?
15. That’s a dang OLYMPIC sport!
16. An event established in fine and historic nation of Greece.
17. A fine and historic nation that up till now has a fine and historic BAN on all flying Donkeys.
18. And Flying Honey Bangers.
19. AND AND AND flying Springboks!
20. Sure they let in Flying reindeer- but do they do it from love? No. they do it from FEAR!
21. Not that flying hooved beasts are anything to be feared.
22. So if you think I was judging you flying donkey, then you are wrong wrong….
23. Really Wrong.
24. Look I'll just say it "Sorry dude, I thought you were a reindeer. My bad".
25. But, In my defence I heard rudolf was once mistaken for a levitating warthog!
26. And if you think you’re better than a levitating warthog then you’ve probably never heard the awesome Math Rock band - Levitating War Pig!
27. Did you think I was going to say Levitating Warthog?
28. Ha ha , Like anyone would name a band after a “warthog”, ha ha ha.
29. See, we’re having a laugh now - nothing awkward about that
30. Saying “nothing awkward about that” is a bit awkward though…
31. Dang
32. I’ve got carrots - want one?
33. Ok two
34. Now ya love me!
35. Yay
36. I love me too
Yay.

Well I think We’ve answered this one:
Spotting a flying donkey instead of one of Santa’s reindeers ultimately leads to YOU finally being able to tell yourself that you love yourself.
Awwww.
Thanks flying donkeys !

Todays blog was brought to you by:
Levitating War Pig - the best Math rock band this side of the great pork-rock belt.
And
“Self love - if you want it - then stay away from fucking Santa”.
And
Mills - run one today - you’ll feel GREAT about yourself.
And
Grandmas poetry - look most poetry sucks - not grandmas. Plus she made you soup!
Awwww.
Yay. 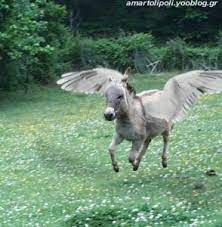 One million reasons to say "rad"