I used to blog all the time. Like every day some days. And other days not quite that, but close!

Then I started not blogging all the time. Mostly because people stopped reading blogs much and/ or because my blogs had turned into nonsensical nonsense (the worst KIND of nonsense) which lead to not many people reading it.

But then, in a huge twist, the other day I thought "I wonder how my blogs doing" and then I followed that thought up with another thought, this time "maybe I will check".

And then I DID check.

What I discovered shocked me - in my absence my blog has still been slowly picking up some reads here and there. In fact, my blog as of typing has 987298 total reads. NINE HUNDRED AND EIGHTY THOUSAND PLUS. And just the PLUS is over SEVEN thousand.

The point is, I have not been maintaining this blog, which is silly, cause I am nearly at one MILLION reads.

And I would like to reach ONE MILLION reads.

(Preferably the one where he says ONE MILLION dollars).

(Or maybe the one where he does a one MILLION point turn in his little cart in that little hall way, I like that one too).

The thing is, I reckon it seems like having one million reads would be rad!

(Remember that Austin Powers Meme, I recommend thinking about it again here).

(Please only remember it if it was the one about the ONE MILLION dollars).

If I had a million reads, "I've had one million reads" would be something I could say to people, for example.

Or "Hows your family" I could say to people when I am being modest and curious, while thinking "have they had one million reads, cause I have".

Will it be nonsensical nonsense some of the time? You can dang count on it.

Will it be good sometimes? MAYBE.

But carnsarnit, I am going to go for the MILLION!

And I deserve the million dang it, or else this meme doesn't say ONE MILLION dollars. 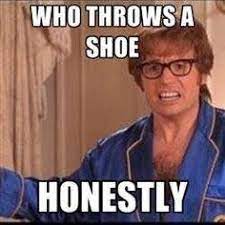