And now, finally, reasons why "The Sangriham" is a bad name for a Sandwich

There's a lot of good names for sandwiches out there.

We love these sandwich names. And for good reason, they are GREAT sandwich names. Solid, rich, descriptive, and sometimes, with some minor adjustments to ingredients, HILARIOUS.

"I'll have The Sangriham", people imagined characters in films saying. Mediocre films AND great ones, and possibly even TV shows, although we didn't research that.

"Sorry we're out of The Sangriham" we imaged the reply, in gritty dark dramas. Or "Great choice, coming right up" in witty, possibly New York or San Francisco based romantic comedies.

Did that happen though? No it didn't. Why? Because, sadly, it turned out The Sangriham was a BAD name for a sandwich. Some even say "really" bad.

And now finally the reasons why it is a bad name, (or as some say "really" bad) are to be revealed, exclusively here. 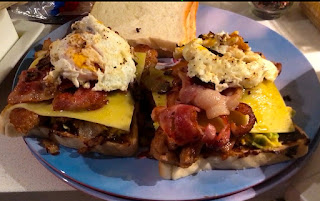 1. The name sort of hints that the sandwich may have ham in it. But does it? Yes. It's an optional extra. Well fuck you, I don't LIKE ham dicks.

2. Is there just one single The Sangriham on earth? Nope. Fuck you, I wanted an exclusive.

"Well I'm not going to asks for a The Sangriham, am I. The grammar is AWFUL".

5. Fuck, now that I think about it I don't think me actually knows what grammar actually is? It's not spelling, it's not punctuation, or is it both of those things?

6. And why do people care, it's all just words.

7. And dots and dashes and shit.

8. Plus - dot? How the fuck did the dot get to be the "and that's final" punctuation. "I'm not going to buy a bucket of sand ever again period. They have them for free at the beach. If you bring your own bucket". Being a sentence with prime use of both the word "period" and it's punctuation representative the dot, to represent the phrase "and that's final".

9. Fuck that - dot does not deserve this power.

10. I mean what is a dot? Is it like the point of an arrow. Because that's the scary bit of an arrow, and I am FOR removing that.

11. Now, "A pointless arrow", now that's a killer name for a sandwich. It's witty AND it makes you think.

12. "The Sangriham" on the other hand would be an awesome name for a building. Possibly one where people gather. "I'll see you at The Sangriham" would be something people would say. Then they would discuss specifics, like time, dress code, and possibly details about the other people whom may be gathering there. Hell Yes!

13. The Mustard was passed use by date. Yuck.

Well I think we've answered this one.

- Someone should name a building The Sangriham, with a sandwich shop, which sells a sandwich called A Pointless Arrow, and with IN date mustard.